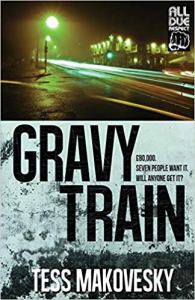 Jacks stared at the scrawny girl who was supposedly helping her.  Late teens, ratty hair, the scars of acne still visible on her narrow face.  A baby in a world of adults.  A baby who was sneering at her again.

She clenched her teeth.  Fiddly work, this, and if she got it wrong she could blow them all to kingdom come.  She didn’t need the distraction of babies being rude.  “I don’t see why not.  I’m as involved as any of the rest of you.  More.  You wouldn’t have explosives without me.”

“I like animals.”  It was true; she’d had a rabbit as a kid, and adopted a stray dog for a while in Afghanistan.  Mangy mutt with matted fur, but it had followed her about and she’d been attached to it, until it got caught up in a roadside bomb.  She still hadn’t forgive herself for that.  Another reason why she was here.  The suffering that man put his fellow creatures through.  She probably had more idea of that than most of these silly kids.  Besides, the way Merry said ‘love’ sounded worryingly wrong.  There was a law against that sort of love.  Not that she was going to point that out.  Too much hassle.  Just when she needed every last shred of concentration.  She snipped the wires.  Wrapped the bare ends together.  Poked them into the plastic packed inside the ball.  “Pass me that flap.”

Merry’s pout said it all.  A thin arm shoved the flap across the table top, jarring precious components, spilling tools on the floor.

“Careful!  Do you want this going off?  There wouldn’t be much left of you.”

The pout became a scowl.  “There wouldn’t be much left of you either if it comes to that.”

“True.  And then who’d you get to make your gear?”

Merry waved a hand as if that was just detail.  Quite funny, really, if you thought about it.  She had so little idea.  So little understanding of the work, or the danger, this involved.  She thought all the excitement was in placing the bombs, not making them.  She needed to learn a thing or two.

Images of red rain hovered in Jacks’ mind.  Serve the silly cow right.  One little nudge and BOOM.  No more Merry.  No more superior, patronising little bitch.  Trouble was, there’d be no more Jacks either, as Merry had already pointed out.  She needed another, less fatal, way.  That copper who’d contacted her the other month.  Put the feelers out, trying to get her to turn “Queen’s evidence” on the rest of the group.  She still didn’t know how he’d tracked her down, although she hadn’t been that careful since she got back.  Other things on her mind.  Usually involving too much violence; nightmares, cold sweats.  She’d kicked herself when he approached her in the pub.  Should have taken more precautions, hidden herself away.  Too late now.  And she’d told him to fuck off, anyway.  But the idea had stayed, nibbling at the edges of her mind.  Help him?  Or help these kids?  They seemed to need her more – her special skills, her experience.  But they weren’t exactly overflowing with gratitude.

“How’s it going?”  Ian, their supreme leader.  Or so he liked to think.  Another jumped-up teenager, although this one was at least old enough to vote.

“Not bad.  It’d be faster if I had more help.”  Or even any help at all, since Merry was being a pain.

“Yeah, sorry about that.  The others are all out on reconnaisance.”

He said it with such a serious air.  Jacks fought back a laugh.  Much he knew about reconnaisance, or any of those other quasi-military terms he threw around.  Making it look like he knew what he was talking about.  It didn’t work on her.  You didn’t spend eight years in the army without understanding the terms.  These kids were so annoying.  She didn’t know why she bothered with them.  The money helped, of course.  Not a fortune, but it helped.  What else could she do when she’d been kicked out, and couldn’t get a job, and had no home?  Sleeping rough was hell.

Ian had wandered out again.  Merry was fiddling with her phone.

Jacks grabbed it off her and chucked it across the room.  “How many times do I have to tell you?  One spark from that and you fry the both of us.”

The pout was back.  Again.  Another mutter, which sounded suspiciously like “Go and screw yourself.”

Maybe if she kept quiet, Merry would go away.  The flap screwed neatly into place.  Now she had the rest of the wiring to worry about – the bit that went at the other end.  That wasn’t the technical term, of course, but it was how she’d had to explain it to the rest.  They weren’t engineers.  They hadn’t learned about this stuff.  Which was why they needed her at all.

“Of course, if you were really committed…” Merry was still banging on, and it was getting harder to screen it out.  Like a dripping tap, moan complain whinge.  She felt her hands tense, had to fight to relax them again, one finger at a time.  No good letting it get to her.  No good making mistakes.

Not one of us, not one of us.  The petulant words rang inside her head.  She couldn’t tell if it was Merry any more, or if she was imagining them.  Trouble was, she’d never really fitted in.  Home, school, army, she’d been a loner all her life.  And hated it.  She’d have given anything to have a friend like other women did.  A best friend, to swap tales of boyfriends and soaps, pour out her troubles, provide support when times were hard.  But somehow, she never had.  Never trusted anyone, perhaps, or they hadn’t trusted her.  That dog was the closest she’d ever come.  Now she was alone, with only these children for company.  Children who weren’t afraid to emphasise her loneliness.

“You don’t understand how important this is.  You’re not one of us.”

Quite suddenly Jacks had had enough.  The shrill, affected voice.  The spiteful words.  The nasty triumphant look.  God help her, she was going to make it stop.  Even if it was the last thing she ever did.

Inspiration flashed.  She was winding duct tape around the wires, needed to hold it down and cut off the excess.  It was fiddly enough at the best of times, but with cramping hands it was nigh on impossible.  “Here, hold this down.”  She indicated the tape.

Merry wasn’t stupid, she’d give the child that.  “What about fingerprints?  I’m not wearing gloves.”

“It’s fine.  This will be vapourised when the bomb goes off – there’ll be nothing left to lift fingerprints from.”

“Oh.  Okay.”  A reluctant finger held the tape in place.  Perfect.  Jacks snipped, careful not to nick the flesh.  Tempting though it was.  A little blood to add in to the mix.  A little DNA.  But no, even Merry might suspect.  She tidied the ends, finally let out her breath.

“There.  One down, five to go.  You can help me the same way with those.  At least that way you’ll be getting really involved.”

“It’ll be brilliant all right.  Light up the night sky for miles around.”  She hid her smile.

She tugged the rucksack over her shoulders and ran.  Just a few more minutes and this would all be over at last.  There was the entrance to Kings Cross now; all she had to do was cross the road.  Dodging traffic and endless seething crowds.  People who would never know how close they’d come.

She ducked inside the station and headed for the public phones.  Dialled.  Waited.  Dug out the business card with that copper’s name.  Asked to speak to him.  There was a wait; she hoped he wasn’t away from his desk or the whole thing might fail.  She didn’t know who else to speak to; didn’t know who to trust.  Then a voice, a man’s voice, that she vaguely recognised.  She got the information at the tip of her tongue, as few words as possible so they couldn’t trace the call.  “Animal Life Forever.  There’s a bomb at Kings Cross station.  A football inside a blue holdall by the phones in the main concourse.  Two more at Euston, one at Waterloo, two at St Pancras.  Revenge for all the deaths during Foot & Mouth.  What’s that?  No, there’s no danger of them going off.  I made sure of that.”

And she rang off again.  Smiled.  Hefted the rucksack containing her few belongings.  Headed for the desk and a ticket to somewhere, anywhere that wasn’t here.  Secure in the knowledge that the police would find the bombs.  The experts would dismantle them.  And find Merry’s fingerprints on the tape inside every one.

Liverpool, she thought, and then a boat.  She was too young to have served in Northern Ireland but she’d always fancied a trip.  Belfast sounded good.  She could settle, make friends, make something of her life.  Get another dog.  She could be one of us after all.

2 thoughts on “Fiction: Bang to Rights by Tess Makovesky”