I watched a lot of TV throughout my childhood and early teen years. As I got older, I started turning my back on TV for long periods to make time for other things (music, books, concerts, writing, etc.), so I’ve missed out on a lot of big cultural moments in the last couple of decades (Breaking Bad and Game of Thrones among them—I know, I know). That said, I still gleefully tumble down a “TV” (streaming) rabbit hole every once in a while. A few all-time favs include The Wild Wild West, The Simpsons, The Office, Justified and Fawlty Towers. A few recent favs include Mr. Robot, Russian Doll, The End of the F***ing World and Bosch.

I didn’t start reading for pleasure until my late teens when the guitarist in my high school band handed me Deadeye Dick. From there I quickly read everything else by Kurt Vonnegut. I stuck with literary fiction for most of my 20s and 30s (Charles Bukowski, Umberto Eco, Annie Proulx, Jorge Luis Borges, Mikhail Bulgakov, Katherine Dunn, Martin Amis, etc.), occasionally veering into genre fiction by Phillip K. Dick, Neal Stephenson, Raymond Chandler and Kem Nunn. I really got into crime fiction about a decade ago, thanks to Don Winslow, Joe Nesbo and Arnaldur Indridason. These days, Blake Crouch is one of my favorite authors. Dark Matter blew my mind, but his new one, Recursion, is even better. I’m also an unabashed Harry Potter fan.

I also read a lot of non-fiction books about music. I loved We’ve Got The Neutron Bomb and Under The Big Black Sun, both oral histories of the early LA punk scene (and I’m currently reading the follow up to UTBBS, called More Fun In The New World). I recently read an excellent book about the Chicago power pop band Shoes called Boys Don’t Lie, A Man Called Destruction about Alex Chilton, and Ray Davies’ bizarre autobiography, X-Ray. I loved Trouble Boys about The Replacements.

I’ve spent most of my life listening to it, watching it live or playing and recording it myself. My older brothers got me into classic rock and heavy metal in elementary school (Cheap Trick, Iron Maiden, Motley Crue, Judas Priest, etc.), but I discovered punk in junior high (Dead Kennedys, Sex Pistols, The Ramones, The Gun Club, Descendents, Black Flag, etc.) followed closely by post punk and new wave (Buzzcocks, Nick Cave & The Bad Seeds, The Go-Go’s, The Soft Boys). My musical tastes got pretty broad once I started seriously playing drums in bands myself (early Johnny Cash, The Velvet Underground, The Kinks, Linda Ronstadt, Big Star/Alex Chilton, John Coltrane and 70s David Bowie were huge retroactive discoveries), but punk/alternative/indie rock/pop have been constants for me (everything from Husker Du, Robyn Hitchcock and The Specials to Jawbreaker, Fountains Of Wayne and Supergrass). Lately I’ve been listening to a lot of Frank Turner, Jason Isbell, The New Pornographers (and A.C. Newman’s excellent solo records), Kurt Baker, Sloan and Ty Segall.

Late last year I was asked to co-edit an essay collection about power pop with Paul Myers (it’s called “Go All The Way” and will be published by Rare Bird Books this October). That project helped me re/discover classic melodic guitar bands like The Records, Bram Tchaikovsky, The Nerves, The Shivvers, 20/20 and Shoes. Those bands, in turn, were the inspiration for my new crime fiction novelette, That’ll Be The Day: A Power Pop Heist. I just self-published that one this week. I’ve gotten a lot of great feedback on it from crime writers and music-lovers alike so far.

I also recently played drums on a record by an LA-based garage rock/power pop band called The Brothers Steve. Music comes out on vinyl in late July.

Yes, please. I was lucky enough to backpack in Europe after college and lived in Prague for a while in the early 90s. My daughter and I went back to visit last Spring and was happy to find it’s still a magical city. I also toured with bands in the 90s and early 2000s, so I spent some time driving around America, and a little in England and Japan (although that kind of travel is mostly about truck stops, chain restaurants, cheap motels and dingy nightclubs). Vietnam is still on the bucket list for my wife and I. And I’d love to get back to Japan.

Thanks for having me at Punk Noir Magazine!

BIO: S.W. Lauden is the author of the Greg Salem punk rock P.I. series including Bad Citizen Corporation, Grizzly Season and Hang Time. His Tommy & Shayna novellas include Crosswise and Crossed Bones. A new novelette, That’ll Be The Day: A Power Pop Heist, was released on June 18, 2019. S.W. Lauden is the pen name of Steve Coulter, drummer for Tsar and The Brothers Steve. More info at http://swlauden.com. 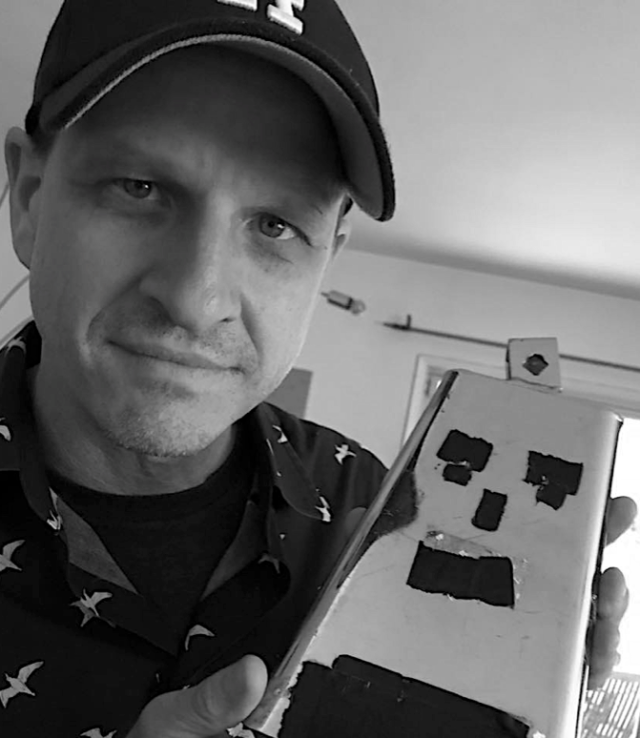