You know that game where you’re supposed to let yourself fall backward and trust someone to catch you so you don’t knock yourself out? I used to appreciate that game.

People call what I used to like perverted, but is trust perverted? Among human beings there’s no sentiment more noble than trust. Soldiers know this. The enemy wants to kill you. But they wouldn’t have to try if you couldn’t trust your own side. Inside of a day you’d go mad or kill yourself. And think what trust means to man’s best friend. A dog shows submission by rolling onto its back so that another dog—if it was in the mood—could tear out the submissive one’s exposed genitals. Dogs form lasting bonds that way.

I used to play that game, and you probably think it’s perverted. But I call it noble because it’s about trust.

I’d stopped in a town north of Oxford on my way up to Coventry to see the cathedral, which is what tourists did. In a pub called The Plough, I met Nicola and decided not to go back to California for my last year of college. The owner didn’t care that I had no work permit. He hired me and I worked behind the bar with Nicola and moved into her bedsit.

During my first week with her, I woke up in the middle of the night tied to the bed. I’ve always been a sound sleeper, proving it has nothing to do with having a clean conscience. She took me in her mouth and bit down. I tried to scream but she’d taped my mouth shut. I had an orgasm like I’d never had before.

She removed the tape. She said next time I’d have something else in my face. She said are you ready again and I said give me a few minutes. She said I think you’re ready now. Suddenly she was pressed against my tongue and her teeth were in me.

It took all my strength to be gentle, what with her being the opposite. But the effort of restraining myself generated an intensity that I was able to direct to the place I wanted it most. I felt like I was a foot long and made of iron. That was my incentive to put my tongue to her with the lightest pressure I could manage, despite so much pressure inside me that I always thought would blow too soon. Pressing ever so lightly, not easy for a man because he wants to show off his strength. Making tiny circles. Reminding myself how small an area I had to cover so my tongue wouldn’t go wandering off.

She would talk about the effort she had to make to keep quiet because we had neighbors on all sides.

“Like fireworks, Alex,” she’d say. “Know it sounds tired and yeah, it’s better than that. But still like fireworks because you think it’s over and then look out, here we go again. I have to keep sucking to keep quiet even after you’re a wet bloody piece of meat.”

She didn’t mean bloody figuratively in that slangy British way, but bloody literally.

Nicola was adventurous in other ways, too. By herself she’d traveled a couple of times to Africa, and not even to the cities but way out into the country to stay in villages in mud huts. To me that sounded more dangerous than what we did in bed, but she laughed.

“The people are lovely. Long as you can do without a proper toilet you’re fine.”

“And without electricity,” I said.

She made a face: a shudder, I guess.

“I was fine until the last night of my second trip. Had the same illuminated watch I’d owned for years. Never realized what it meant to me until that last night because when I woke up in the night I’d always look at it right off to see the time. But during my last night it stopped working and I woke up to pitch darkness.”

She made the same face.

“There was no dimension to anything. I put my arm in front of me to make sure I hadn’t been buried alive but it was no good: couldn’t see it. Found the door and went outside, but it was cloudy. Couldn’t see the stars.”

The memory was making her sweat. I brushed her forehead dry with my hand.

“There was a lovely family whose hut wasn’t fifty meters away. Léoncé and Flavia and lots of children. I thought I could probably find it even in the pitch dark, though I’d have to take care not to fall because of the rough ground. But I knew Léoncé would build a fire if I told him I was frightened.”

I brushed her forehead with my other hand.

“But out there you don’t go walking about alone after dark. Hyenas.”

There was a limit to my sympathy. Pitch darkness doesn’t bother me and Africa didn’t interest me.

She rolled her eyes.

She had the same look she would give me before asking if I wanted to be tied up.

“And you’re going to help me face my demons, Alex.”

Nicola’s only valuable possession was an old steamer trunk that had belonged to her grandfather. She kept it next to her bed, covered by a cheap tablecloth. We ate for free at The Plough when we worked, but otherwise we ate in to save money.

“Bloody slaves’ wages to tend bar in this country,” she would say.

The steamer trunk served as our table. I would sit on the bed, with her on the other side of the trunk in a decrepit wooden chair that I was too heavy for.

“You think that’s a good idea?” I said when she told me I was going to lock her in the trunk and keep her there for an hour.

“Same trust you show when I tie you to the bed I’m going to show you. For one full hour I’ll be absolutely terrified.”

She smiled even though she was sweating.

“But I’ll get through those sixty minutes and be a different person.”

I uncovered the trunk. It was beautiful even though it needed refinishing.

“You’re willing to ruin this by drilling holes in it so you can breathe?”

“There’s holes in the sides you’ve never noticed because of the tablecloth,” she said. “My grandfather did that.”

I knelt to look.

“Made a habit of traveling in it to save on fares,” she added.

Even Nicola wouldn’t be able to stretch out in it. I wondered if her grandfather could have been smaller than she was.

“Taking the piss,” she laughed. “Got no idea why the holes are there, but it saves us drilling.”

We gave careful thought to when I would lock her up. We agreed that in case she started screaming, we’d have to do it during the day when the neighbors were at work. The one afternoon that we both always had off from The Plough was Wednesday. We decided on eleven to twelve so that afterward we’d have plenty of time at The Plough.

“I’m under no illusion about this, Alex. Expecting to need a few when it’s over.”

At ten on our chosen Wednesday morning she had the idea of making love in our usual unorthodox way.

“Want to be as relaxed as possible to start out,” she explained.

We finished at quarter to eleven. She put on her most comfortable clothes and took some deep breaths.

“You have ten minutes.”

She climbed into the trunk and lay on her side, bending her knees. I shut the lid and locked it. I put the key in my pocket. I sat on the bed. I’d expected her to want to talk, but she was silent. I knelt and put my ear to a hole. Her breathing sounded abnormally regular, if that makes sense. She must have been focusing on her breathing to try to relax.

“All we have is rock,” she said. “I probably need something else.”

I found an old geezers’ station: classical. This’ll put us both to sleep, I thought.

I sat on the bed and listened. A symphony, I guess. I imagined sitting in a concert hall and thought pitch darkness I can handle, but trying to hold still for this would be torture.

I got down on my knees to listen to Nicola’s breathing. It had slowed down like she was asleep. I waited for a quiet moment in the music and whispered her name. Sleeping.

Five after eleven. She had another fifty-five minutes. A total of fifteen minutes to get to The Plough and back would leave me forty minutes to drink, time for two or three pints. But I couldn’t chance her waking up with me not there. I figured I could give myself twenty minutes, though, long enough to finish two pints if I hurried.

The Plough was empty. Not what I’d hoped for, but the drinking went fast: no need to occupy my mouth otherwise with talk.

On my way out I met Ian Watson and a whole crowd of his friends. They were celebrating his birthday. They said have one with us and I couldn’t say no. Plus I had that twenty-minute cushion in case Nicola didn’t wake up. I told myself she wouldn’t.

I finished my pint quickly and said I had to go and Ian said why. I told him Nicola was waiting. But he said what’s so important she can’t wait a few more minutes, bloke only has one birthday a year. I said fair enough but after this one I’m really going and I’ll make it quick.

Which I did, and which I think was my mistake. Because that was four pints on an empty stomach since I hadn’t eaten anything since I’d wanted to hurry back to Nicola. And the fourth drunk too fast since I’d promised to make it quick, and I think halfway through somebody bought a round of whisky for everyone to pour in their pints. But I’m not sure about the whisky because by then I was far gone.

I staggered home at three o’clock. It must have seemed like forever to Nicola, wondering what had happened to me and when I’d come back and terrified I never would.

Yet when I pulled her out she stopped screaming. She had every right to keep on, only at me because I deserved it. But it was like she saw I was pissed and decided screaming wouldn’t do any good.

Instead of screaming, she got quiet and said “You need to sleep it off.”

I woke up to that biting sensation I knew so well. Except it got worse—a lot worse—and when I looked down at her she was standing up with the whole thing in her mouth. I screamed but she was laughing. Before I could get out of bed she’d run to the loo and flushed it away.

I was one moment looking at myself, not able to believe it, and the next covering myself with the blanket to soak up the blood, paying no attention to Nicola. It was gone, what was the point?

But I paid attention when she said “I’ve called the police, told them got a Yank working at The Plough with no permit, guess he forgot he’s here on a tourist visa. They’ll collect you in the morning, ship you back to California.”

California, town north of Oxford, I didn’t care. I was wondering how fast I could get to a hospital and what the rest of my life would be like.

“Bloody fool you were to trust me,” Nicola said. “Like I was a fool to trust you.” 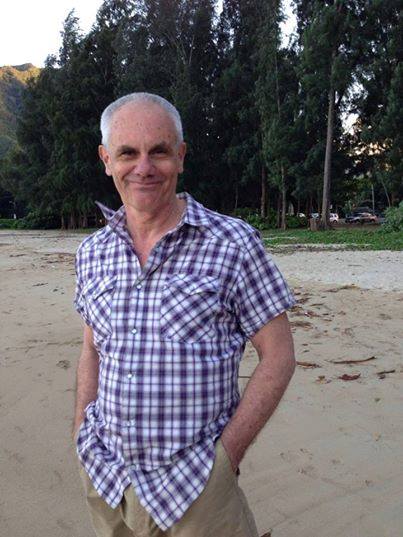