Silvio Foxx is a tall, uneasy looking man. He watches me cautiously from across the buckled concrete floor of his warehouse, an unlit high-tar cigarette dangling from his plump, girlish lips.

“That’s what my probation officer calls me…”

He grunts, unimpressed with my humour, or my prison haircut – or both.

He beckons me towards him with a crooked finger.

“I suppose you had better come in.”

Covering more than a square mile, Marsh Barton is the largest trading estate in Exeter. It is home to the cattle market, the abattoir and more second-hand car dealerships than you can shake a dick at. It’s also home to hundreds of enterprises that are harder to classify: companies with flimsy business models and flimsier morals. Housed in obscure, half-rotted buildings where local entrepreneurs can thrive – away from prying eyes.

Foxx is wearing a black pleather jacket and smells of dehydrated urine. His rat-grey hair hangs limp over his forehead, and I think I can see lice in it.

He flicks the light switch with a theatrical flourish. Dust motes swirl in the air.

“Do you remember your first pornographic magazine, young man?”

It was dog-eared and half-buried in the thin stretch of woodland behind the children’s home where I spent my formative years.

I scan the walls of his office. There are framed first issues of some of his titles: ‘Bronco’. ‘Fairmont’. ‘Futura’. ‘Transit’. I’ve enjoyed my fair share of suburban pornography, but I haven’t heard of any of these magazines. They sound more like hatchbacks than fucking wank-mags.

He gestures to a magazine called ‘The Gentleman’s Handshake’. It looks soiled and ancient – like him.

“My father gave me this on my 13th birthday. It was a different era, Mr Rey. I’d likely be incarcerated if I attempted to give it to a 13-year-old boy nowadays, but I found it very… instructional.”

I lower myself into a frayed velvet armchair and a cloud of musty grime rises around me.

Foxx coughs away the dust and points to a creased looking VHS cover in a greasy clip-frame. The movie is entitled ‘Orgasm Addict’.

“This is Shelley. She was working behind the counter in a chain store when I discovered her.”

“And if I don’t find her within seven days, she’s probably dead.”

Foxx grins lasciviously, his decayed-looking facial features creasing in half.

“I admire your flair for the dramatic, Mr Rey.”

“All part of the fucking service.”

I don’t know Exeter well, but I do know Bobby Burnthouse. Until recently, we lived on the same cellblock at HMP Channings Wood. When you eat three beige meals a day at the same table you develop an appreciation for a man’s strengths and weaknesses.

Strength? Impressive constitution for stodge. Weakness? Folds like a Trago Mills lawn chair at the first threat of violence.

His hangdog expression drops even further when he sees me – eyes fixed on his half-drunk pint.

“A few beers and a few laughs with my old mate Bobby.”

He glances around the bar at his derelict drinking buddies, and then hisses at me:

“Fuck off, Rey. You’re about as funny as a collapsed lung. If you’re not gone in ten seconds me and the boys will kick the shit out of you.”

I chuckle to myself. Bobby’s punches are weaker than my fucking jokes.

I roll up my right trouser leg, revealing the rubber-grip handle of the pig-knife in my boot.

“Ok, how about you convince me that I was right to stop the Tapeworm from hacking out your fucking windpipe.”

“What do you really want?”

Sidwell Street is awash with ruined men. Men with hate in their eyes and blades in their pockets. Short lives and blunt knives.

Greasy junkies congregate outside the Polish delicatessen, buying £1 cans of 9% Karpackie to kill time before their next dose of methadone. Bobby keeps his eyes on the cracked paving slabs as we pick our way through the throng and cross the road.

Last year Garry Gluten was arrested on this very street with a bloody shovel and a bloodier lump hammer. The police never discovered the body, but they discovered 14 photocopied pictures of Shelley Peters sellotaped to the ceiling above his semen-streaked single bed. Obscure details like that are hard to dislodge – like a particularly virulent venereal disease.

Gary Gluten, I recall, was a second cousin of Bobby’s. When the other lags found out they beat him with pillowcases full of tinned foodstuffs and lashed him with the leads from their electric kettles.

Bobby leads me to his cousin’s first-floor flat and hits the buzzer, whispering into the mouthpiece, too quiet for me to hear. He won’t fuck me over though – not now I know where he drinks.

The external door clicks open and he fidgets on the spot – reminding me of a small child who is about to piss himself.

I nod and he scampers away like a stomped rat.

The flat smells of blood and excrement – or bloody excrement. It’s hard to tell the difference in the heat of the moment.

There is absolutely no fucking life in Gluten’s eyes when I bludgeon him with my Poundland claw hammer.

Shelley’s anatomy spasms as his cranial blood coats her bubble perm. I drag her out from underneath his slack, lumpen body and wrap her in the viscera-streaked candlewick bedspread.

She gazes at me, curiously.

“Everyone likes a happy ending, right?”

Tom Leins is a disgraced ex-film critic from Paignton, UK.

He is the author of the Paignton Noir mysteries SKULL MEAT, SNUFF RACKET, SPINE FARM, SLUG BAIT and BONEYARD DOGS and the short story collections MEAT BUBBLES & OTHER STORIES and REPETITION KILLS YOU.

DIRTY BULLION – a collaboration with Benedict J. Jones, author of the Charlie Bars series – was published in August 2019 and THE GOOD BOOK, a collection of wrestling noir, will be published by All Due Respect in December 2019. 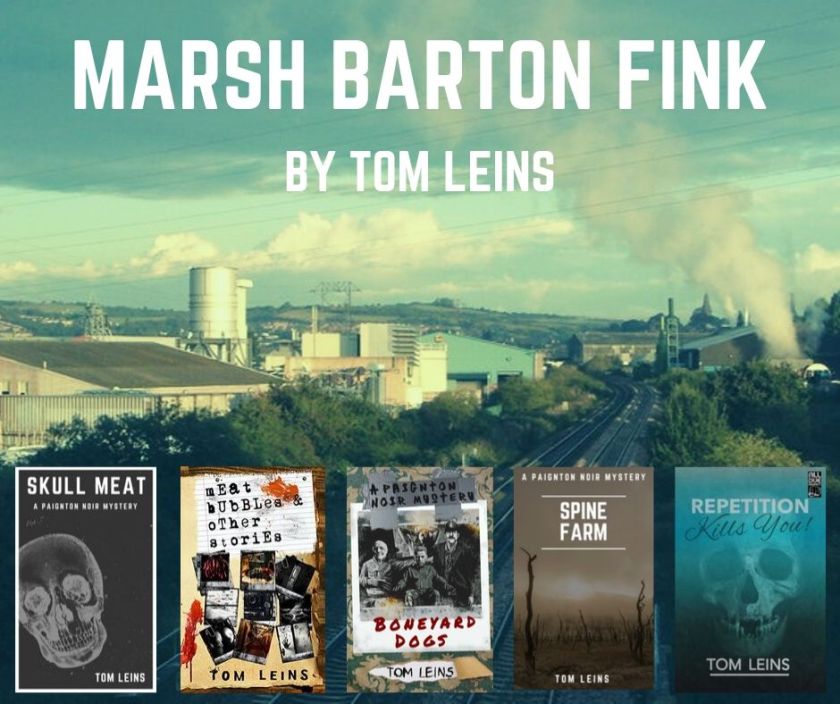 One thought on “MARSH BARTON FINK By Tom Leins”