I was down in the red light district

collecting warm blankets for the elderly,

prosthetics the VA had been working on.

I had one redhead in black fishnets tell me.

I can tell the sightseers from the real action.

in the air so the astronauts up in the space station

would have something to look at.

I pointed just in case she didn’t know where space was.

With one of my fingers that had not been blown off in war.

one part of me as a biological being.

I tried to show her my Jimmy Dean East of Eden ankles,

My socks pulled up too high and her present mood too low.

When things come together, you can really tell.

The tricks falling in love with the girls and Elvis marrying

everyone back from the dead.

The Baby & the Shark

Had this dream on spicy food

without brushing the teeth

that a baby in a carriage rolled down

off a cliff while the mother was busy

being Narcissus playing with filters on her phone

at the same time that a hammerhead shark

washed ashore and beached itself

about twenty feet away

and how all these kids ran up to the shark

and their parents ran after them

and how one kid got too close and the shark

bit off his toe in a panic

while no one even noticed the baby,

not even the mother who was in the middle

of updating her profile picture

Probably in the Same Clothes

He made these strange hand signals

in a wind tunnel full of revenge,

said he belonged to a gang

so I asked him how Kool was doing these days;

he seemed confused with the tinted back window

in no man’s land: half up and half down…

my black lunch pail under my arm after another

solid eight at work, too tired to even see the plate

of the car that sped off or to care,

knowing I would be right back here again

in another twenty four hours, probably in the same clothes

because any man who feeds the machine long enough

stops caring about such things.

Denon has Winged Victory and the Venus de Milo

and Mickey Mantle Slaying the Hydra.

You know more about these works than anyone else

in here and we’re at the Louvre, she says.

but I find myself in a mood.

beside Michelangelo’s The Slaves.

Before getting my wife to take a picture of me

with the museum map out

asking a bust of the Emperor Tiberius

in the Roman antiquities

I can hear all the whispers

After a few pictures in the Sully wing

of the cavernous stone halls meant to mimic

the tombs of ancient Egypt,

we are done with the Louvre.

Trying to leave, but the exit signs just take us

further into this mess.

and a few Delacroixs,

but the range of paintings

Some of the most excitement

comes from trying to get my coat

out of the locker

and helping a few others.

The long walk back out to the street

to rejoin the living.

I Was Tired of All the Drama

I wouldn’t have gone outside

I was tired of all the drama.

Just up from a roofing job in the city.

A loudmouth should get his ass beat.

Even if he’s a friend.

But Catherine came inside,

said someone was trying to beat up Shane

who didn’t do anything to anyone.

Covering her eyes and asking if we were fucking

even though we had all our clothes on

and she knew it.

So that I found myself back outside again.

that his children should go back inside

and that we apologised for any

He kept talking so that

I told him I gave him a chance,

that he should stop talking now,

that I would put him through the ground

but not without some

Then I got really drunk

in that kitchen in Letitia Heights

as she kept handing me drinks

and pretending to drink

a few of her own.

I can’t understand people that shower before bed

The water wakes me up

and my damp hair against the pillows

gives me a headache.

when you just have to get up

If you want to shower after especially dirty sex

I get it, but the rest of you seriously

The day will come soon enough.

Enjoy your dirt and the dark

It is the same pattern over and over.

One horn toots at another that responds.

Then the bike bells go, followed by the ambulance

No one gets out of the way for either

so the sirens are constant.

my wife says before rolling over.

I pull the blanket up over my shoulder

and that is all I remember.

What I liked about

all those Clint Eastwood movies

was the way he seemed to always care

in a greater sense

without being non-committal about that

which did not matter in the moment

stepping outside the law

when it no longer applied

and how he carried that absolute cannon around

in one clean act

of the janitorial services

so the streets of San Francisco

with the failed shocks of their

and our scowling anti-hero

was out of country;

the bleeding hearts all

was supposed to fight Noodle

in a schoolyard brawl

and no one cared in

and I remember chugging that entire mickey

of tequila in the parking lot

on a dare at the YMCA

before racing around the track

at full speed for more than an hour,

lapping all the professional assholes

in my street clothes

because I was crazy and everyone else

was in lazy spandex

and later at that party in Letitia Heights,

a childhood friend looking for protection

because someone’s girl had been fucked

and now played the victim

out in the garage

got warm as idiot

Ryan Quinn Flanagan is a Canadian-born author residing in Elliot Lake, Ontario, Canada with his wife and many mounds of snow.  His work can be found both in print and online in such places as: Evergreen Review, The New York Quarterly, Cultural Weekly, Punk Noir Magazine, Gutter Eloquence, The Dope Fiend Daily, and The Rye Whiskey Review. 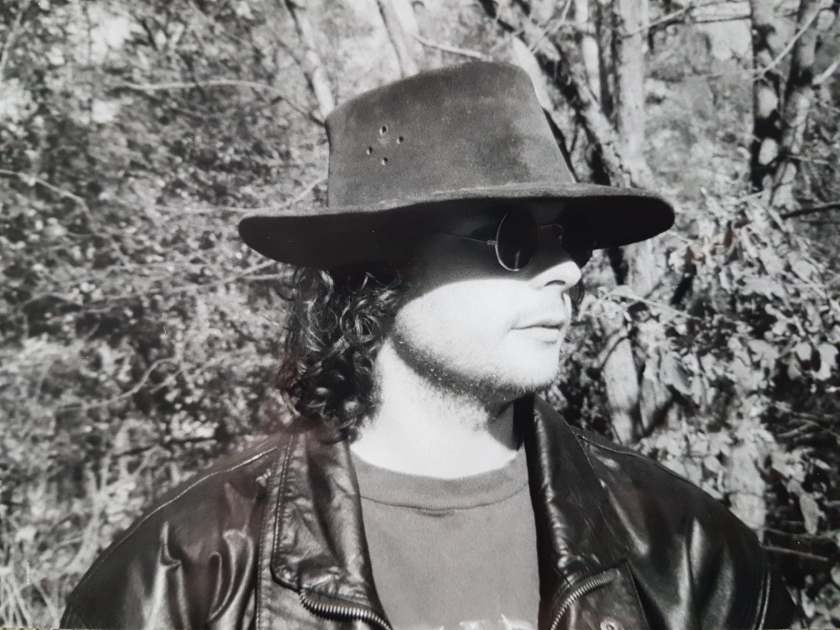