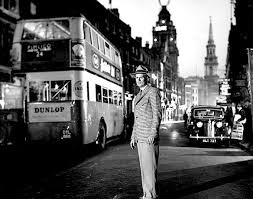 ‘We are looking to raise £3,000 to crowdfund the production of a high quality paperback edition of the iconic London novel ‘Night And The City’ By Gerald Kersh.

“The story of damaged men in damaged times”  Iain Sinclair

A Classic Of British Literature & Film

Harry Fabian is a cockney wide boy trying to make it big in the Soho underworld of the 1930s. He is a Flash Harry in an expensive suit, a chancer operating in a cosmopolitan corner of the city where villains, spivs, prostitutes and strong-arm men thrive. But his ambition and reckless nature are pushing him towards more and more extreme acts – and a day of reckoning.

Night And The City is a classic work of social-realist fiction that captures the vibrant yet seedy underbelly of London between the world wars. Its author Gerald Kersh was high-profile, prolific and hugely popular at his peak, but would later drift into hardship and obscurity. His writing is now being rediscovered. A maverick character in his own right, Kersh’s life was as colourful as those of his most flamboyant creations.

As well as a respected novel, Night And The City was twice filmed – in 1950 and 1992 – and it is the first of these adaptations that is today regarded as one of the best of the British film-noir genre. Directed by Jules Dassin and starring Richard Widmark and Googie Withers, it was shot in an urban landscape heavy with menace and charm – just like the book on which it was based.

This version will include a new, specially commissioned introduction by Paul Duncan, who is working on a biography of Gerald Kersh, and an afterword by John King of London Books.

“An understated literary classic” – The Guardian

We are looking to produce a high quality paperback edition of this classic novel. By crowdfunding we can ensure a high quality end product. We are experienced book publishers and confident that we can achieve the target publication date of December 2019, but as with any publishing project there is a small risk that this date will not be achieved.

With Kickstarter the money is only deducted from your account if, as we hope, we reach the £3,000 target. If we are successful, it will be deducted only once the project has closed.’

Find out more about the Kickstarter campaign HERE.

‘London, that great cesspool into which all the loungers and idlers of the Empire are irresistibly drained.’A Study In Scarlet by Sir Arthur Conan Doyle.

So, it’s no great surprise that Britain’s capital city has lent itself to its own particular brand of noir, from the likes of con man Harry Fabian and his fellow hustlers in Gerald Kersh’s brilliant 1938 novel Night and the City, to George Harvey Bone, the murderous alcoholic in Patrick Hamilton’s marvelous Hangover Square, (1941).

Outsiders abound, of course, unsurprisingly so in Colin Wilson’s Ritual In The Dark (1960), a

‘modern day’ Jack The Ripper tale which would be called a period piece now. It’s a kind of British Crime and Punishment which takes place in a sexually and socially repressed 1950’s Britain and a vividly drawn Soho. Written in 1949 but published in 1960 it is distinctly pre- The Beatles (pre rebellious youth) and post WW2. It is also a distinctly British exploration of existential extremes featuring a murderer who kills as a creative act, a positive rebellion against the supposed unimportance of his existence. Ritual In The Dark -Post war angst in a world where ‘we’ve never had it so good’  just isn’t good enough.

More up to date is Layla by Nina de la Mer, a gripping and gritty slice of London noir about the downward spiral of a suburban girl who moves down the smoke for a better life and becomes a stripper.

And plenty of other crime writers have explored London’s dark side too such as Derek Raymond,Martina Cole, Carole Morin, Charlie Higson, Benedict J Jones and Cathi Unsworth.

So, check ’em out!
Widgets