JW: When did you begin your career as a writer /editor of pulp writing,  Maxim?

MJ: I never meant to specifically be involved in what you term ‘pulp’. From early childhood I was an avid reader and quickly found out that I actually wanted to write stories and all followed from there. My early tastes (and career) were for science fiction and fantasy, although I also read a lot of crime and I began publishing my first stories in magazines in France, where I was then living, from the age of 16. But because I was bilingual I read and was aware of what was being written in English and one day convinced a Paris publishing house to allow me to edit a volume of the latest in British SF, and that became my first anthology.

MJ: Cornell Woolrich, Dashiell Hammett, Jim Thompson, David Goodis, Fritz Leiber, many of which I Iater had the opportunity to publish when I began work in publishing per se

MJ: If I knew, I would have written it. As it is I keep trying again and again and as soon as a new novel of mine is published, I realise I can do better and start another! It’s very much in the eye of the beholder, the right alchemical blend of locale, characters, plot and feelings.

JW: What did you think of the film version of Get Carter? Do crime novels tend to make good films, when adapted?

MJ: I’m a great fan of it (and actually director Mike Hodges is a good friend of mine; and I published his first novel a few years back). Although it differs greatly from the book which is equally good. Generally I prefer original scripts to book adaptations, but a few do stand out like Carter or Falling Angel or turn out even better in the case of The Godfather, which maybe points to the fact that mediocre books can make great movies while important ones do not, as they already occupy a level which even film at its best can’t reach.

JW: Are there any writers that you could tell would become a huge successes through their early writing?

MJ. Lots of new writers have impressed me immensely; even more so as for past 6 years I’ve been a judge for the Crime Writers’ Association First Novel Dagger so seen a lot of debuts, but as to predict who is going to be ‘big’, so much depends on marketing spend and promo publishers allow it and the unpredictable quirks of the book trade. Have spent most of my life in book publishing and all too aware that quality is not always the issue. Right now my two tips for the future are Chris Whitaker and Lou Berney but who knows if they will make it big.

JW: Do you have a new collection of stories that you are editing, Maxim?

MJ: Am currently editing the 3rd volume in what I hope will become a regular series of anthologies, each on a different mystery theme, for US publishers Mango. First one, Historical, has just been published. Next, Amateur Sleuths and Private Eyes is delivered and out in autumn and now working on 3rd, Impossible Crimes and Puzzling Deaths, for 2020. And my fairly major general crime anthology Invisible Blood appears in UK and USA next month, with stories from many of the biggest names in the genre, including a new Jack Reacher tale by Lee Child.

I had taken 4 years off editing anthologies as I was busy on a series of books outside the genre, eleven in all, most of which made the Sunday Times bestseller lists, albeit under a pseudonym. “I create things out of boredom with reality and with the sameness of routine and objects around me.”

If films about writers are to be believed, all you have to do is live an interesting life, write it down, and change the names. Making things up always fails, like Romeo and Ethel the Pirate’s Daughter. Mike Hodges goes further to suggest that cynically manipulating the truth is the true way to success. The director whose work spans gritty neo-noir like Get Carter and the sublime silliness of Flash Gordon, made two films about writers decades apart, but they share some interesting qualities.

Pulp (1972) features the legend Michael Caine as the man who grinds out the titular tripe, first glimpsed in an office where panting typists churn out his fevered stew of sex and violence to support his indolent emigrant lifestyle in the Mediterranean. He’s tapped to ghost a veteran actor’s memoirs (Mickey Rooney in top form) then everything starts to get strange. Generally thought of as a cult classic, it mixes in a host of winking nods to the genre and ambles along to an odd conclusion.

I’ve only recently got around to Croupier (1998) thanks to Anne Billson and I can’t believe it took me this long. I think a lot of it had to do with how it was marketed as a crime film—which it is, but that’s not what’s interesting about the movie. From the first Clive Owen voice over he sounds like Guy in Your MFA who is writing ‘noir’ in his ironic Chandler persona. I may never get over the first shock of Owen as a blonde though. His girlfriend (fabulous Gina McKee) is clearly keen to think of him as a writer—so romantic! She’s disappointed when he takes a job as a croupier though  astonished at how much he’ll make.

One of the things I appreciate about the script is how his whole back story in South Africa is built in little pieces throughout the film but never spelled out completely. Owen’s Jack is so tightly wound yet so clueless about himself. Gradually he begins to think about writing a novel about his co-worker, then at last just straight up autobiography (released anonymously). Of course it’s a success: imagination is overrated.

The weirdest thing may be the writer, Paul Mayersberg, who has worked in and written about the film industry, as well as penning the Pulp-worthy erotic novels Violent Silence and Homme Fatale. Better known for scripts like The Man Who Fell to Earth and Merry Christmas Mr Lawrence, he also wrote and directed The Last Samurai (1988). No, not the Tom Cruise one: the Lance Henrikson one. Who knows what happened between script and release, but the results were not stellar. On IMDB there are several scathing one star reviews along with a ten out of ten stars review, so who knows? Maybe it’s a hidden gem. I suspect it’s not.

Writing is hard. Live a life someone else can write about and you will probably be better off in the long run.

K. A. Laityis an award-winning author, scholar, critic and arcane artist. Her books include How to Be Dull,White Rabbit, Dream Book, A Cut-Throat Business, Lush Situation, Owl Stretching, Unquiet Dreams, Chastity Flame, and Pelzmantel. She has edited My Wandering Uterus, Respectable Horror, Weird Noir, Noir Carnival and Drag Noir, plus written many short stories, scholarly essays, songs, and more. Follow her on Twitter, Instagram or Facebook.

She also writes crime as Graham Wynd and historical fiction as Kit Marlowe. 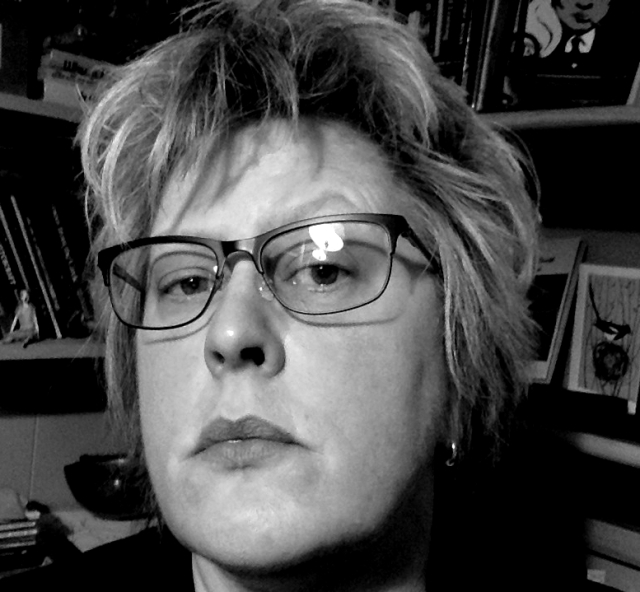