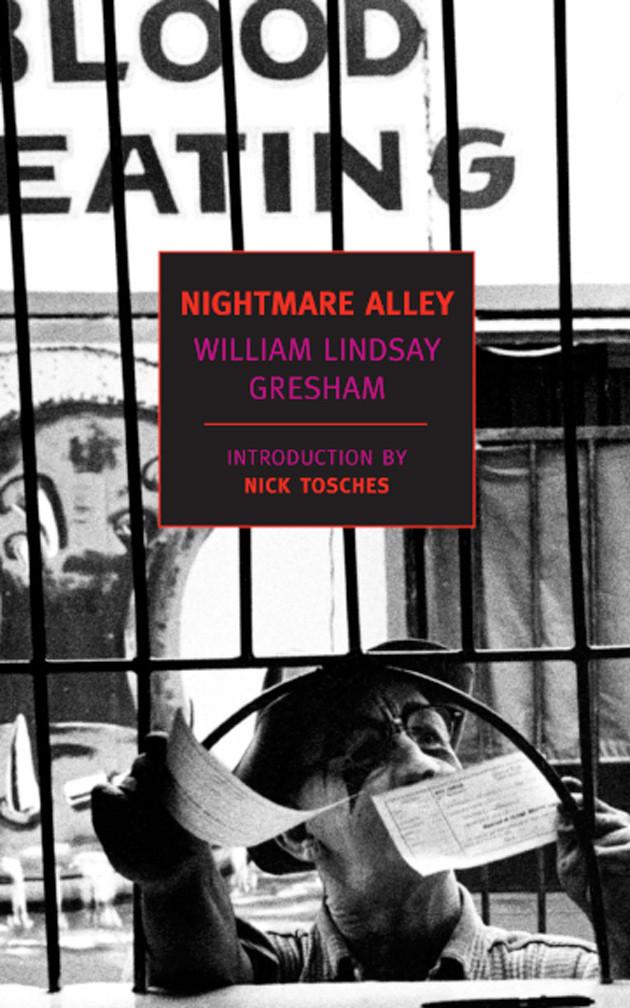 When I showed Nightmare Alley to the students in my noir film course, one came up at the end to complain that the tarot readings were way off. I agreed and encouraged him to pick up Gresham’s novel. I assured him that the author cared a lot more about the tarot than Hollywood (e.g. the Death card surely always means literal death).

William Lindsay Gresham must have spent some time exploring the tarot in his too-short time on this earth. The troubled man might have found some solace shuffling the fated deck or maybe just amused himself reading fortunes for others like Zeena does in the novel. According to Nick Tosches’ introduction to the NYRB edition of the novel, he turned to tarot after Freud. Through the character of Lilith Ritter, he seems to suggest that psychoanalysis is just another form of the grift.

Gresham structures the book with 22 chapters, matching the major arcana of the tarot and begins with the card of the Fool—numbered 0, a card for beginnings. But he shuffles the deck and slips in a couple changes or innovations: card 6 should be the Lovers, but the chapter is called Resurrection of the Dead—which could be a bit of a Freudian joke itself. The Lovers do appear as card eleven. Card 18 is usually the Moon but chapter 18 is called Time. The Moon becomes instead card ten.

What are the missing or changed cards? Card 14: Temperance is the first one missing. The NYRB edition of the novel uses the Waite-Smith image of the Temperance card to illustrate the chapter called Time (itself a short chapter, as if time were fleeting). The image of the card shows an angel mixing wine and water in a gravity-defying manner (well, it is an angel). The chapter subtitle is ‘One foot on the earth and one on water, an angel pours eternity from cup to cup’. Time however is often an aspect not of Temperance, but of The Hermit (card 9 but chapter 17). In some decks the card is simply called Time. Temperance (or the lack thereof) is certainly a big part of the story (and the author’s story as well) so it seems a resonant change.

The other card not named is Judgment, usually card 20. It’s used to illustrate the chapter called Resurrection of the Dead. The subtitle of this chapter describes the card like this: ‘At the call of the angel with fiery wings, graves open, coffins burst, and the dead are naked’ and the Waite-Smith image is clearly based on ideas from the Book of Revelation, but it’s usually interpreted with more positive meaning than the macabre focus here. The chapter, however, fits this dark image. Stan dredges up the memory of when his childhood died.

I’m still mulling over Gresham’s novel and his interpretations of the cards. I recommend both the book and the film for noir fans who life the art of the grift, the smell of the carnival and the mystery of the tarot.

Bio: K. A. Laity is the award-winning author of White Rabbit, A Cut-Throat Business, Lush Situation, Owl Stretching, Unquiet Dreams, À la Mort Subite, The Claddagh Icon, Chastity Flame, Pelzmantel and Other Medieval Tales of Magic and Unikirja, as well as editor of Weird Noir, Noir Carnival and the forthcoming Drag Noir. With cartoonist Elena Steier she created the occult detective comic Jane Quiet. Her bibliography is chock full of short stories, humor pieces, plays and essays, both scholarly and popular. She spent the 2011-2012 academic year in Galway, Ireland where she was a Fulbright Fellow in digital humanities at NUIG. Dr. Laity has written on popular culture and social media for Ms., The Spectator and BitchBuzz, and teaches medieval literature, film, gender studies, New Media and popular culture at the College of Saint Rose. She divides her time between upstate New York and Dundee.